We wake today to ice-cream colours: opal icebergs, turquoise sea and the snow cosmetic pink in the low sunlight. Shards of ice litter the water, bobbing and rocking in the ship’s wake, each with its own circle of ripples. Some roll over as we pass, clinking and bumping against the hull. We sail on slowly to minimize their impact. There’s only a flutter of wind, but intense cold numbs our cheeks and lips within seconds. At the fracturing edge of the glacier, luminous blue bergy bits calve into the sea, sending shock waves down the bay. Our ship rises and falls in the creaking ice. 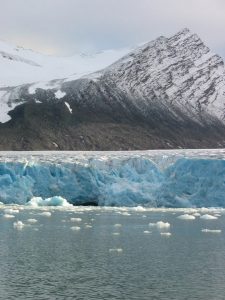 Further up the fjord the land resolves itself into a series of rocky islets. Our skipper tells us that polar bears frequent these shores in summer, because the arctic terns nest here and provide easy prey for bears marooned ashore as the sea ice breaks up. Will they still be here? There’s nowhere else for them to go until the sea freezes over again, and down by the shoreline there’s a hint of vegetation: lichens and deep umber moss, poor food for a polar bear but edible in the famine of late September. We are all excited. To see a polar bear in the wild is the ultimate goal of this voyage for all of us. We stand on deck, binoculars freezing to our fingers, scanning the rocks. Nobody really knows what we are looking for. We point out white oval rocks: could that be one? No, too small, the wrong kind of white. Expectation builds, tinged with the possibility of disappointment. Some are so overcome by the biting cold that they retreat to coffee, peeling off layers of clothing. But a few stay outside. We note small, regularly-shaped patches of snow: no, too grey, or too far from the shore, we decide, not polar bears. 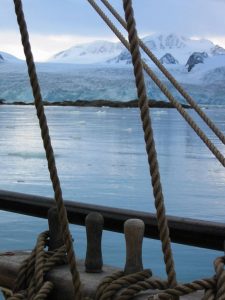 Long-tailed skuas swoop and dive-bomb the elegant terns, forcing them to drop their catch; seals rear their heads from the water and the glacier cracks and thunders. But we all want polar bears. The first mate points out what appears to be another patch of snow. It’s creamier in colour. No, we think, it won’t be. Someone has a big telephoto lens and takes a picture. We all crane over the postage-stamp image. It’s a polar bear.

We furl the lower gallant and brace the spars round so that we can edge closer, quietly approaching the shore. It gets so shallow that we gently run aground. It doesn’t matter, the sea is now glassy calm in the polar high pressure. We stand in silence, an echoing silence of ice-clinks and bird-cries. The polar bear looks up, eyes us without concern. He stretches with huge paws extended, shakes his lustrous coat, stands up and ambles along the crest of the islet, pauses to look at us again before he retreats to the far side to settle again away from the whirring cameras.

So why do we so want to see a polar bear? Most of us look at our captured image rather than at the real bear as he shambles away. We can have a far better, closer, longer view in a zoo or on a wildlife programme. Perhaps because he’s moving through his own environment, doing what he wants to do. Or perhaps because we know he could kill us – and would if he had the chance —and we’re not normally exposed to animals that eat humans beings. Or perhaps, at some primal level, we’re hunting the ultimate prey and have succeeded. We shoot him with the camera but have bagged him nonetheless. We all smile and share our electronic images. Coffee beckons. 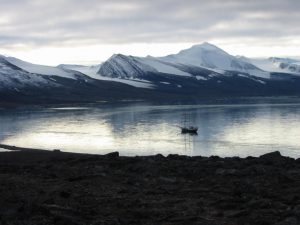 One Reply to “Looking for polar bears”