We’d stopped only for photos. It was already 10am, almost resting time for pumas, so we had no real expectation of seeing any more of them. They’d been lurking by the track, shifting shadows before dawn, then prowling in sharp silhouette on the skyline as the sun rose. It was still very cold. Frost glazed the tips of the long, parched grass where it was still in shade. The broken teeth of the Torres del Paine, impossibly high and still white with winter, towered over us. Condors circled, wings immobile, drifting upward on thermals. 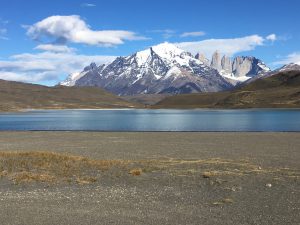 Below, a herd of guanacos clattered across the shore of a glacial lake, gleaming milky as an opal. They seemed relaxed: some wandered off to graze, others drank from the lake, only one acting as a look-out with head prominently raised. Their pale, silky hair streamed in the keen wind.

Chatting with misted breath, we watched them, took our photos and were heading back to the minibus when a fight broke out between two guanacos, males challenging with angry grunts. The breeding season was approaching. The dominant male chased his rival along the beach. Both raced along the shore, necks outstretched and gaining speed. Gritty pebbles skimmed from their hooves and splashed the water. Suddenly a low, tawny shape launched a tackle from sharp right. Another guanaco? Too big, too rufous. Long tail thrown sideways to balance. Puma! We hadn’t seen her, hidden in the rocks. The guanacos veered off in alarm, barking a warning and speeding up to their maximum sixty kilometres an hour. The puma streaked after them over the beach, up the hill following a narrow animal track through the berberis scrub. The guanacos tore ahead, slowly gaining ground on the flagging puma. At the crest of the ridge they dared to pause, swinging round to stare back at her and still whinnying. She couldn’t maintain their speed. 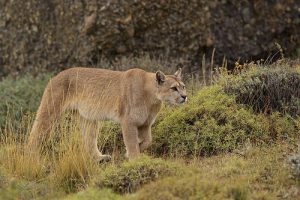 “Here, I’ve got her in the ‘scope,” called our guide, Alvaro.

He had the telescope already set up on a tripod. We crowded round, taking turns to look. She had flopped on the path and now lay there, nonchalantly licking a paw. Long lenses focussed, shutters chattered. Every guanaco within sight, hundreds of them in the amphitheatre of hills, was now focussing on the puma. Barks echoed all round. We could identify exactly where she was sitting, simply by following their gaze. 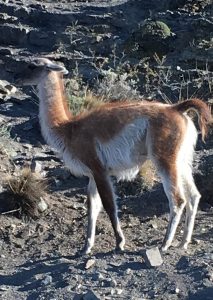 She ignored them, stretched and rolled sideways, then after a few minutes, ambled up to a rocky outcrop elevated above the thorn bushes. She started to settle there, but then jumped. A great forepaw flew out, down, and she picked up a stunned hare in her mouth and snapped its spine. We heard the crack through the stillness. Then she leapt down, scraped a hollow in the scrub, hid the hare and covered it with vegetation. “For later,” said Alvaro. “Keeps the condors away.”

We left her there, half-concealed once again, an amber patch on a rock behind the sage, and still recuperating from her sprint up the mountainside. 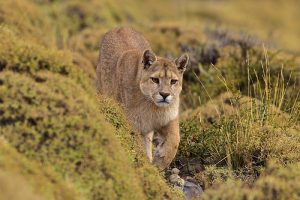 When we returned along the same track along the lake in the evening, we stopped to see if the puma was still there. The stinging cold had returned as the dusk set in and now the only sound was the shuddering wind. Her rocky outcrop was deserted, just a dark outline against the snow of the highest peaks, glowing pink where still caught by the sun.